The Trust provides ten principles as overarching guidelines for reuse and reinvestment. Among these, I find particularly compelling the principle regarding the economic benefits of reusing older buildings:

Older places provide the distinctiveness and character that engender success. Older buildings give cities a sense of identity, history, and authenticity—which is the most important competitive advantage they can have in today’s economy.

The city of Lancaster illustrates this principle well. The historic fabric gives Lancaster a unique character that residents and visitors value as a desirable place to live, work, shop and socialize.

When we examine the layers of history embedded in old buildings – if we are looking and listening carefully – they often reveal unexpected discoveries. With a preservation-oriented approach to design, these can contribute a unique character and identity for a building’s next incarnation, producing something unique, memorable, and enriching in cultural character, both old and new, and linking the generations that have used these spaces across time.

We’re currently inspired by the details we are discovering in the building that stands at 217-219 W King Street. This property has nearly always been a tavern. Archival evidence tells us in fact there was a tavern on this site as early as 1778.  After a fire in 1825, a new building was built that was first known as “The Sign of the Treaty of Ghent,” later to be called the “Manor Hotel,” a name it kept until 1923. (The Treaty of Ghent ended the War of 1812, and cemented the well-being of the United States by restoring peaceful relations between the USA and Great Britain. Why the tavern-keepers chose this name is a curiosity, but it seems to underline the significant ties between taverns – also known as “public houses”  – and the sphere of political life at that time).

This building dates from a time before hotels as we know them today: in early America inns or taverns offered food and drink on the ground floor, with a few rooms on the upper floor rented to travelers or longer-term boarders. Early maps of Lancaster reveal a town peppered with these little inns.

Though this building has had a succession of owners – in the 20th century housing cafes and bars, with various alterations along the way – remarkably, much remains here that offers glimpses into mid-19th century life.

Carefully stripping away the layers of ground floor alterations, we uncovered a large fireplace at the back, which must have been part of the original tavern space. The outline of the projecting mantle shelf survives at the top of the wood facing, and within the plastered brick fire chamber an iron door remains. This would have accessed a masonry bake oven built within the building’s original rear wall. 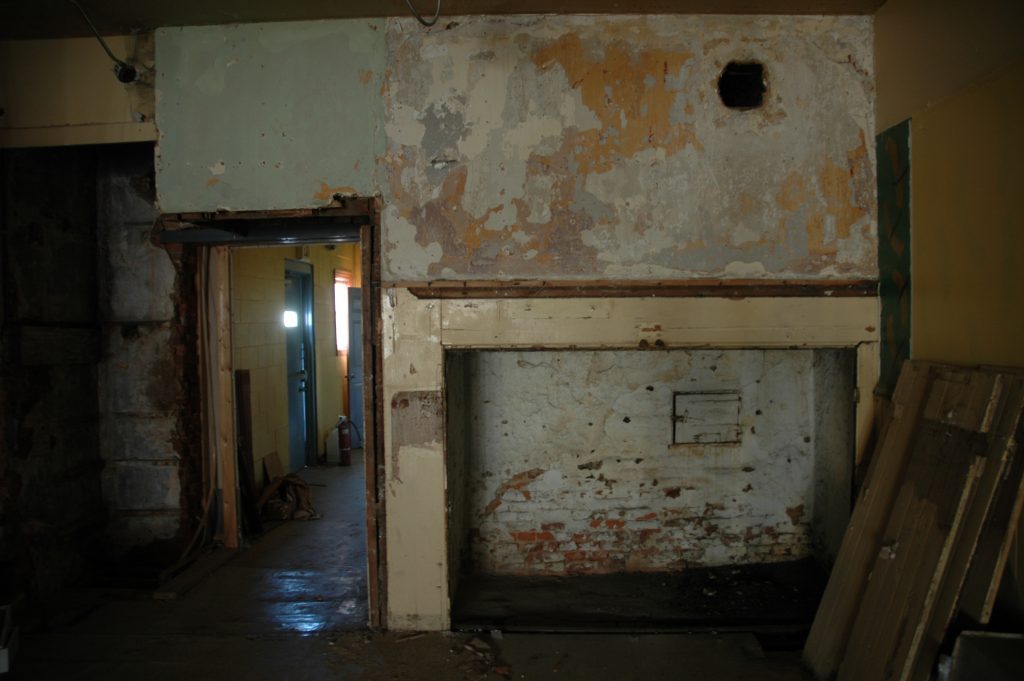 The upper floors of this building are the spaces that intrigue me right now. There is a very spacious front room with large windows offering a great deal of light, as well as grand folding doors leading to a somewhat smaller public room. Both have intact fire-places with brick hearths and finely-moulded wooden mantle pieces and surrounds. These were the social rooms of the mid-19th century hotel. The rooms at the back of the second floor and third floor are still papered in the floral patterns suggestive of more domestic spaces.

We always enjoy finding the juxtaposition of different materials from different eras.  They may not always be appropriate to retain as part of a new use, but these are the signposts that help us understand the story of the place, and may inspire design in new directions.

What will be the next chapter in this story?  I can’t wait to find out. 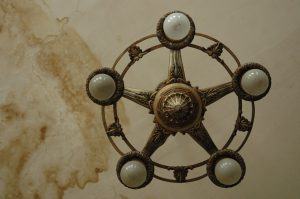 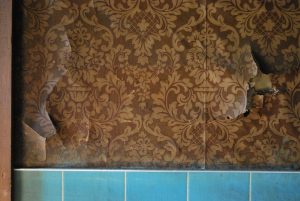 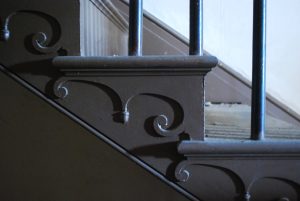